Collaboration or Cultivation – How we see our organization 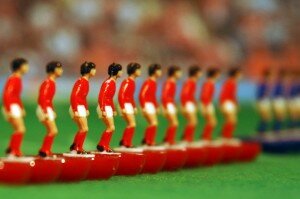 I attended Israel Gat‘s presentation at Agile 2010 yesterday called “How We Do Things Around Here In Order to Succeed”.

The path an Agile roll-out should follow depends on the core culture of the corporation: control, competence, collaboration or cultivation. Irrespective of the specific culture, the Agile roll-out invariably tests cultural integration, wholeness and balance. It exposes inconsistencies between approach to customers versus approach toward other constituencies such as partners and employees. To create and capture lasting value, the Agile initiative must be linked to a coherent corporate culture. This workshop holds the details you need to know about how to forge this critical link.

The session drew parallels between an organization’s culture and people’s character. Israel defined culture as “how we do things around here in order to succeed” hence, the name of the session. From an organization’s culture perspective, Israel divided the world into 4 quadrants (Control, Collaboration, Cultivation, Competence). The quadrant were derived from axis of 2 spectrum from Possibility to Actuality and from Personal to Impersonal. It turned out François decided to attend the same session which turned out to be useful since the group was divided into smaller group for the exercises. François and I join a group which we thought was most representative of our organization. Interestingly enough, we went with 2 different groups. Below is what I captured to be the essence of the Collaboration theme (what I thought represented Pyxis the most) and the Cultivation team (which François thought represented Pyxis the most). Note that the description came from the various groups and not the speaker.

This group structure pathology is when relationships become more important then results.

This group structure pathology is when subjective impressions by charismatic leaders over rules the objective data. At the end of the session, it was interesting to notice that we were probably both right in our assessment. It turns out, Pyxis is a Collaborative and Cultivating culture. Now is time to do something interesting with this information.

Martin Proulx
I am an agile organizational coach and president of Pyxis Technologies.   Most people agree that I am an effective coach, an influential leader and a change agent oriented towards achieving extra-ordinary results. For nearly 20 years, I have put in place and managed software development organizations. Throughout the years, I have developed an expertise in organizational development, business process reengineering, people and project management.