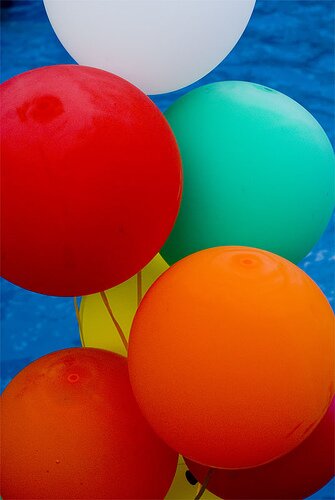 Today marks the 2nd anniversary of my blogging hobby! It has been a fun and interesting endeavour that has allowed me to discuss various concepts with people all over the world, and within my organization. Blogging forces me to crystallize my thoughts and perspective on some important aspects of my leadership style, my coaching abilities and my personal development.

Thanks to all of you who are reading my posts and comment (in person or in writing) on the posted topics. The number of readers have tripled in the last year and the number of followers has gone from 0 to 200 - if you’re not already one of them, send me some positive vibes and start following me

If you like what you have been reading, don’t hesitate to link to my posts and even maybe include me in your blog roll. Thanks to those who have been tweeting and re-tweeting my posts.

If you haven’t been following my blog since the beginning, you may want to read my top 10 blog posts:

Now let’s get back to writing…

What is the job of the president in a self-organized company? 10

Since being appointed president of Pyxis Technologies a few weeks ago, I have been wondering what it means to be “the president” of an organization with a non-traditional governance model. Wanting to be successful in my new role, it is important for me to figure out what is expected of me – hence the questions about the meaning and purpose of my job - and as if the universe wanted to ensure I would answer these questions, Raphaël prompted me to describe what the new role meant for me, during a recent visit to our Paris office.
Since our organization heavily relies on autonomy and self-organization, the new role made me feel like a manager within an Agile organization. So here’s what I came up with (so far):

As I was defining for myself what role I should be playing, I started reading over the week-end Great Business Teams: Cracking the Code for Standout Performance.

Leaders exercise a kind of gravitational pull on their team. Their behavior sets the performance “should be” for others - Great Business Teams: Cracking the Code for Standout Performance.

The books describes the following behaviors which are important for me:

I am pretty sure I will be adding to this list as weeks go by but it seems to be a good start. Needless to say, I am not kidding myself thinking that I will have a perfect score on all these fronts but making my job description public and asking my colleagues to hold me accountable is a challenge I am ready for.

Most traditional organizations would agree that the process is very important but there is a distinction on how the process is handled within Pyxis. At most traditional organizations I worked for (and with), the salary review process is tied to the performance appraisal process and to the budget allocated by Human Resources. At the end of each year, the employee receives a performance rating which determines the percentage of salary increase – people receive an average increase for an average rating and an above-average increase for an above-average performance. The guidelines are clear and applied to everyone the same way. The salary review process takes place between an employee and his/her manager.

We like to do things differently. I have already described that Pyxis is organized in communities.

In a business context, communities are similar to functional departments with some fundamental distinctions. In traditional setting, members of a functional department or of a project team work together to achieve a goal. With some exceptions, team members share nothing but their common goal and a common boss. By comparison, in addition to sharing a common goal members within a community also share common values and culture and they operate within agreed upon self-defined norms. Analytical-Mind.

The employee-shareholders are offered a few options when it comes to their salary review:

The “Tremeur and Jean-François” approach

Factors having a positive impact on salary determination

Does your organization use a non-conventional salary review process?

Agile transitions are hard. I wonder why people feel the need to control? 11

With the Agile approach, we constantly try to implement self-organized teams. Many of us believe that autonomy leads to improved results whereas control may bring consistency.

« The opposite of autonomy is control. Control leads to compliance; autonomy leads to engagement » – Drive, by Daniel Pink

I asked myself, “Why do people need to control?” and came up with 2 reasons: lack of trust and ego. I feel it is important to understand where people come from in order to understand the environment in which we live and operate. As coaches, it’s also important to know why people behave in such a way so we can help them.

I recently talked about fears, which is closely related to the need to control.

The problem with novelty, however is that, for most people, novelty triggers the fear system of the brain. Fear is the second major impediment to thinking like an iconoclast [...] There are many types of fear, but the two that inhibit iconoclasting thinking are fear of uncertainty and fear of public ridicule (Iconoclast: A Neuroscientist Reveals How to Think Differently).

If we are in control of our environment, then we have a far better chance of survival. Our deep subconscious mind thus gives us strong biochemical prods when we face some kind of danger (Control)

It seems normal to try to control our environment and the people around us if we aren’t confident in their motivation. As such, people tend to control. Lack of trust is closely related to fear – fear of uncertainty. In a business context, people try to control for some of these reasons:

Everything that the brain sees or hears or touches has multiple interpretations. The one that is ultimately chosen – the thing that is perceived – is simply the brain’s best guess at interpreting what flows into it [...] These guesses are heavily influenced by part experience (Iconoclast: A Neuroscientist Reveals How to Think Differently).

On the other hand, ego is a completely different beast. The motivation behind controlling to protect the ego is at least as challenging to address as the lack of trust. The reasons behind the need to control to protect the ego are:

Once again to be successful as change agents, it is our role to dig into the reasons behind the need to control. I’m not talking about psychology, I’m simply talking about root cause analysis of the situation in an attempt to properly address the symptoms.

Once we understand the source of the need, we are in a much better position to positively impact people and successfully implement the transition.

The more radical and novel the change, the greater the liklihood of new insight being generated. To think like an iconoclast, you need novel experiences (Iconoclast: A Neuroscientist Reveals How to Think Differently).

Posted on: 10-5-2010
Posted in: Collaboration and teamwork, Management, Management and leadership style

Does YOUR organization have personality? 1

Personality can be defined as a dynamic and organized set of characteristics possessed by a person that uniquely influences his or her cognitions, motivations, and behaviors in various situations - Wikipedia

Yesterday, Pyxis Technologies celebrated its 10th anniversary, launched a new web site, released 2 video clips (How do you explain Agile approaches in 1 minutes? and Software development according to Pyxis) and .

Over 200 guests attended the celebration. Many of the people I had a chance to speak with during the evening told me they really noticed the personality of our organization – some of which even asked if we would hire them. François has done an amazing job at attracting passionate individuals who share a common goal and that truly reflects a Pyxis personality.

Does YOUR organization have a personality?